The blog is not dead...just less, well practically no, time for it! Wolf Tooth Components has taken all my spare and not spare time.

Anyway, I started the Fat Bike season with 5 races locally on mostly single track trails.  I probably didn't run above 5 PSI in any of those races...the snow has been DEEP!
Then duty called and I had to travel for 2 weeks to Singapore and Korea for my work as an Engineer at Seagate.  Besides losing some fitness, the other down side of the trip is that I missed the Frozen Fat Forty, a 40 mile singletrack race that was one I was pumped about doing (and one that suits me well).  I did manage to one more race after I got back before the Fat Bike Birkie (FBB). 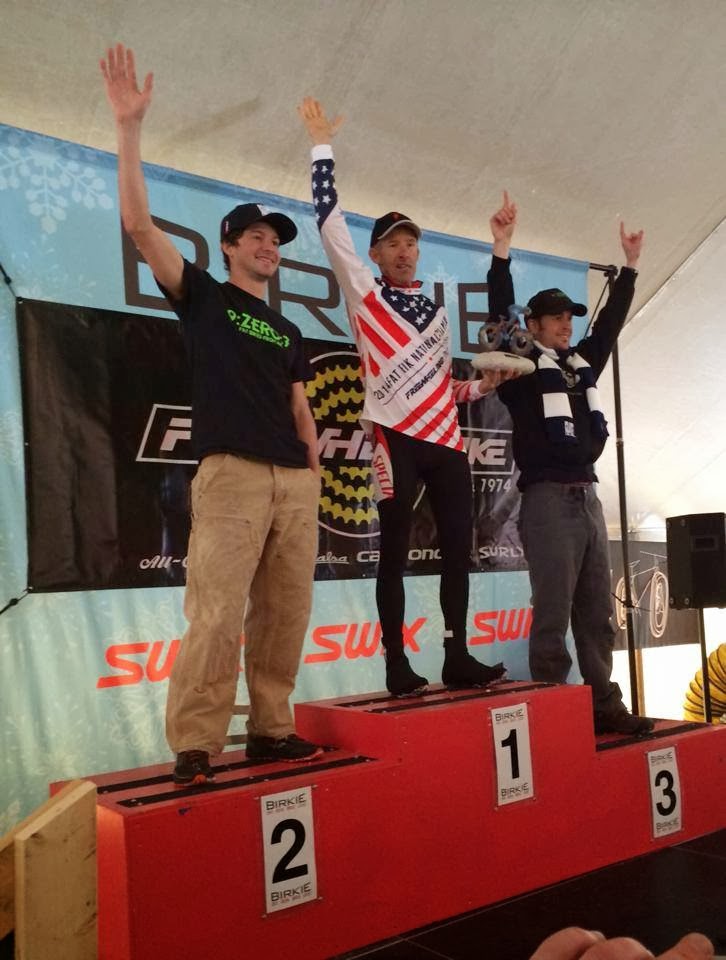 On to the FBB, I finished my fat bike racing campaign up there on Saturday.  The FBB had pretty stacked field and the course doesn't suit me too well with 50k of nothing technical (but lots of tactical).  The event itself was run flawlessly and is a great even for Fat bikers of all skill levels to participate in.
From the gun, Jesse Lalonde, Jorden Wakely and I pulled a group of about 10-15 for 95% of the first 2/3 of the race.  There was some air drafting, but the more significant drag was from the light crust of snow.  Either way,  I wasn't under a lot of pressure and got of the front a few times by just bombing some downhills.  There were some other small attacks, but nothing that stuck.
Then about 2/3 of the way through the race Ned Overend attacked with Jesse, Will and I tracking him down.  These accelerations whittled our group of 10 or so down to 4 or 5.  Then in the midst of another Ned acceleration, my bike kicked sideways when I hit the pacing snowmobile's ski track.  I went into the deep stuff and lost probably 15-20s and a few spots.  I put it in TT mode for a few min and blew past the remaining stragglers to get up to Ned, Will, and Jesse again.  I was on the rivet pulling them back when they were really pushing the pace.  I just needed about 1min to recover from the chase, but that wasn't to be.  One more acceleration by Ned and I fell off...doh!  I had to recover for a few min, and I couldn't see anyone behind me.  From there I caught Jesse and we yo-yo'd with each other for the rest of the time.  We were both pretty tired after all the driving on the first part of the race.  In the end, I just missed 2nd place by a few seconds.  Ned was super strong, and it is so impressive that he can still rock it on the bike like that!  It is always an honor to race with a legend.

I would tell you that next time I will be more patient, sit in more, and save my energy, but I know that won't happen.  Patience and tactical racing are not aspects of bike racing I am interested in=)

On equipment, the 9:Zero:7 Whiteout simply ROCKS!  Pair with that the Hed Big Deal wheels and Shimano components (yes XTR brakes too!) and I couldn't ask for a better racing and riding Fat Bike!

Being a tourists i love to visits in world most adventures places. According to my opinion bicycle could be your best partner for that. last year during my niagara falls tours i had great fun in its local area as well i visited all narrow and wide places. We had great memorable time there.